Set in the 1840’s, YELLOW JACK tells the story of Claude Marchand, a young Frenchman who flees Paris, France with an amazing invention—the Daguerreotype, the original form of photography—and lands in New Orleans where Yellow Fever (Yellow Jack) rages through the city. The epidemic has led to fear, crime, economic and social mayhem, and death. The “Necroplis of the South” is crumbling . . . and Claude has a terrible secret about his past that he must protect at all costs.

Yellow Jack `{`has`}` considerable beauty and a complex wit.... The wit gives scintillating energy to the writing.... Mr. Russell portrays `{`New Orleans`}` with convincing imagination.... Penetrating asides enliven the social detail.... Mr. Russell's finest achievement is the froth in which passion in `{`his`}` Creole Moll Flanders churns along with desolate wit. There are any number of scenes remarkable not only for their shrewdness or power but for what is obliquely expressed or expressively withheld.
Richard Eder
The New York Times
Yellow Jack has a powerfully dreamlike atmosphere.... Russell's prose becomes a series of images, close to poetry in their intensity, further adding to the story's illusory quality.... Russell's virtuoso storytelling, evocative prose and original conception mark Yellow Jack as a significant work that we can only hope will be followed by many more.
Chris Petrakos
Chicago Tribune
Yellow Jack is Russell's first novel, and a flashy debut it is, too: authoritative, ambitious, stylistically elegant. He is an heir to Poe not only in shifty narrative technique but also in his stark, unsentimental depiction of New Orleans' plague and the citizens' decadent defiance of it.... the beginning of a serious, and seriously accomplished, fiction career.
Diane Roberts
The Atlanta Journal-Constitution 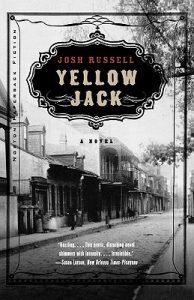